Complex of buildings of the narrow railway station (16, 16A Neries St.)

Complex of buildings of the narrow railway station 2480 (previous code G137K), Historical part of the city,

The complex consists of two blocked buildings: a one-storeyed warehouse, a one-storeyed station and a two-storeyed administration building, built in 1904 – 1907 by a joint-stock company of the narrow railway of Klaipeda that was established in 1900. Paul Richter from Ragaine managed the works. The railroad lines were used till 1944. A red brick two-storeyed administration building of a quadratic plan with a large garret and hip roof was newly re-planned for flats in 1947 - 1952. It has some elements of the “Building Materials” style. A warehouse of a rectangular plan and symmetrical composition with a gable roof was built in the “Building Material” style. After 1944 was overhauled into living house. After the repair works in 1991 it was used as an office. Now House - Guest House 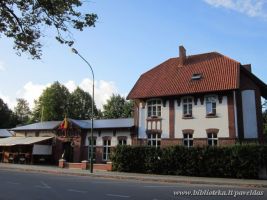 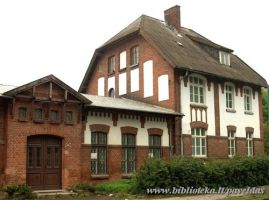