Architectural value
Built in the 2nd half or the 19th c.
Restored in 1979

The two-storeyed building of a rectangular plan (the owner of the living house with the premise for trading on the first storey was a merchant Seelig) with a cellar, a garret and a gamble roof was built in the second half of the 19th century in Neo-romantic style, decorated with arched details. The main facades are facing Zveju and Tiltu streets.It was restored in 1979. 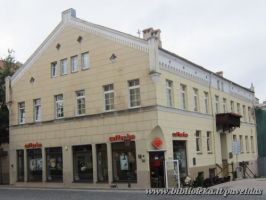