Architectural value
Built in 1915
Restored in 1971

A two-storeyed building has a curb roof. The architecture of the building reflects the Jugend style: jetties enfold the corners of the house, the dynamic vegetal ornaments, curb roof and tendencies of forthcoming motherland style. The building was built to serve as a penny-bank. On the first storey there was a transaction hole, service space, safe-deposit. On the second storey and cock-loft there were apartments, which belonged to the city. That is why the façade of the house was decorated with a cartouche and a blazon. During the soviet times the house was reconstructed. A part of the first storey was demolished and a footpath for the pedestrians was made. The windows of the cock-loft were made wider and more rooms were made. The first storey fits for trading. 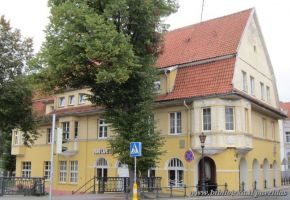 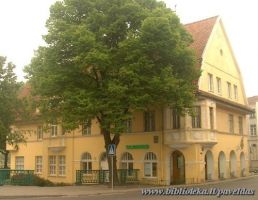