A fort is of a hexagon plan. There are red brick barracks and warehouses of the gunpowder. The fort is surrounded by the moats. The bridge is the only entrance to the fort. The brick tunnels connect the gunboats of the fort and the yard.

The fort was reconstructed in 1889. In 1895 the costly fort was abandoned. In 1923 the Kopgalio fort went to the port. The families of the post workers lived in the barracks and the warehouses of the gunpowder. In 1945 the hitlerites burst the barracks while retreating. In 1974 the constructions of the barracks started. The building regained its authentic exterior. Maritime museum exposition was arranged inside. In 1979 the Kopgalio fortress was opened for visitors. The fortress was rebuilt according to the lay that was recorded in 1877 in the inventory plan. 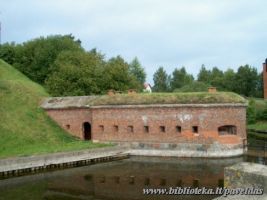