A two-storeyed building of a rectangular plan and symmetric composition has a garret and a flat roof. In the second half of the 19th century the buildings were built according to the project of the national architects – out of red bricks with the stripes of the dark bricks. The building was built for the railroaders to live in. 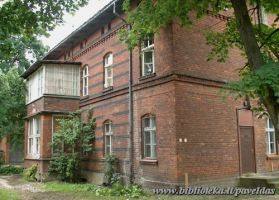