A three-story, brick stucco house of a rectangular plan and symmetric composition with the basement was built in the modern (Secession) style; the sharp cornered arcs – in the late Gothic style. Distinct patterned finish creates a contrast on the facade that faces Liepu street. The owners were R. Klammer and a widow Terner. In 1855 - a widow of a merchant V.Zabrowsky and navigator V.Zabrowsky Ludw. In 1910 the house was reconstructed. An office was located on the first floor, others were used for rent. In 1929 the house belonged to Berlin timbering firm SPOLEK & Zarobkowych. 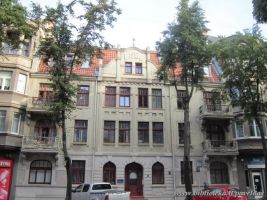