Building 31067, Historical part of the city

A four-story building with a shelter, gable roof. In the first half of XIX c. city sauna stood in a place of the current building. In 1902 when the city celebrated 650th birthday, water supply began to run, a plot with the bath building was bought by a blacksmith who installed a forge here. Later it was transformed to a residential house by a large construction contractor Herman Domsaitis. In 1926 in this building lived famous protagonist of Klaipeda region, priest Wilhelm Gaigalaitis. In 1935 here registered fifteen tenants, from which in 1944 remained only few. 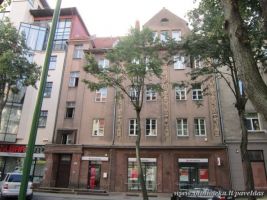