The Fachwerk upper part of warehouse burned out in 1854. The wall of the first storey survived (the walls were one meter thick, made out of little yellow bricks without being plastered from the outside). The second storey was built upon the first one but the walls were much thinner. The roof of the warehouse is flat, covered with tiles. This is a typical example of the warehouse architecture of the day. The warehouse has the interesting rounded exterior corners. A wide arched door is the entrance to the warehouse. The warehouse was restored in the early 1980s (arch. V.Guogis and G.Svirskis). 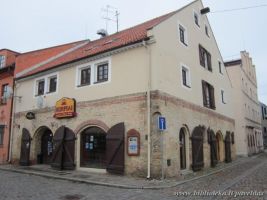 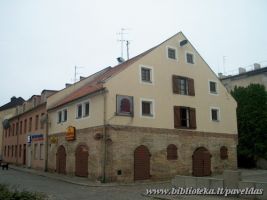