Building 33224, Historical part of the City

XVIII century Was inn „Baltojo zirgo". Nearby there was a summer garden with a pavilion. 19th.c. She is named „Victoria“ Hotel.
1922 The hotel was reconstructed. A new fronton is a built. 20th.c. - There was a first-class cafe-restaurant. 1934 in The hotel was equipped with 60 rooms. There was a large dining room (of serving up to 100 people at a time), Entertainment hall, Summer garden.

During the Second World War there was a Lithuanian people club. 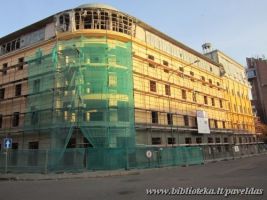